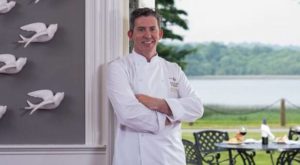 It’s been more than three decades since I last set foot on Irish soil. I have many fond memories of that visit; however hard as I try, I can’t remember what I ate – although I do remember drinking a fair bit of Guinness. I’m sure I filled up on pub food – good grub but hardly fine dining.

A lot has changed in Ireland since then, including the state culinary affairs, as I learned when I interviewed Noel McMeel, executive chef at Lough Erne Golf Resort and Hotel in Enniskillen. McMeel is a passionate evangelist for what he calls “modern Irish cuisine” – think slow cooking and farm-to-table with an Irish twist.

It’s no coincidence that McMeel’s fervor and views echo those of California cuisine pioneer Alice Waters. As a young chef, McMeel worked with Waters at her landmark restaurant Chez Pannise, where the Bay Area chef’s farm-to-table philosophy reinforced his ideas about cooking developed while growing up in Ireland.

In the introduction to his award-winning cookbook “Irish Pantry,” McNeel explained what he calls “the Irish way” of cooking and hospitality. “In the house where I grew up, nestled in the countryside of Toomebridge, Country Antrim, my mother’s kitchen pantry featured a cooling marble slab and sighing shelves laden with traditional and delicious treats standing at the ready to sustain my large family, or to celebrate the vibrant stream of expected and unexpected guests we loved to welcome. Making the most of the bounty of the land, working hard with your own two hands to preserve it, and opening the home to share it—these were the core principles where I grew up. I’d go so far as to say it’s the Irish way.”

McMeel grew up in Northern Ireland, the youngest of six children. His father (now retired) was a dairy farmer and stonemason. “I learned the basics of what makes life worth living growing up in a thatched-roof house on our family farm in Ireland, the Land of the Saints and Scholars.”

The young boy was fascinated with the kitchen where he watched and helped his mother can fruits and vegetables and bake all sorts of bread and cakes. “My first attempt at cooking was an orange cake,” McMeel explained, “I mixed it all up and put it in the oven. We had a new oven with a window, so I just stood there watching the magic of the cake rising and becoming something else – it was beautiful. I was so proud of that cake; when I took it out, I told my mother that I wanted to eat it all. She said to me, “it’s your cake son, do what you think is right.” So I ate it all, every last crumb. I had the worst bellyache ever. My mother just smiled at me and told me one of the greatest feelings you can have is from sharing. I got the point — it was a lesson that I remember to this day.

Like many great American chefs, he enrolled in home economics class while in public school. Formal training followed at Ballymena Technical College and the Northern Ireland Hotel and Catering College and Belfast Institute. He also honed his skills abroad at the acclaimed Johnson and Wales in Providence, Rhode Island.

After learning from the masters at a number of prominent restaurants, including Le Cirque in New York and Chez Pannise in California, the chef returned to Ireland. He earned his chef stripes as head chef at Beech Hill Country House Hotel, Trompets Restaurant, and Castle Leslie. During this time he made regular appearances on televised international cooking shows and contributed recipes and features to Bon Appétit, Food & Wine, and other publications.

I asked McMeel whether Irish star chefs were as revered as those in America. He laughed, “No no, not yet, especially in Northern Ireland mostly due to the economic problems. Many of the talented chefs from Ireland would go to America and other countries for more opportunities and money. But recently, there’s a new generation of passionate Irish chefs here who realize the potential of modern Irish cuisine — and that’s very exciting.”

Miriam Atkins, editor of Food & Wine Magazine, echos McMeel’s sentiments, “Ireland is celebrating a food revolution at the moment – in every corner of the country both fine dining and casual restaurants are championing high-quality ingredients and offering beautifully thought out and creative menus.”

“A lot of the chefs in the region get together frequently to discuss techniques and share sources for the products we use in the kitchen.” McMeel explained, “ If you look at our menus you will see the names of the local sources of the meats, cheeses, butter, and produce – these producers have the passion and skills to provide us the very best. I served one of my signature dishes, created from Pat’s Fermanagh Black Bacon, to many of the world’s leaders, including President Obama at the 2013 G8 Summit.”

Pat’s Fermanagh pork products are a perfect example of the locally sourced products McMeel loves, not only because it’s a superior product, but because it has a great story. Pat is Pat O’Doherty who is known as “the Bacon King of Inishcorkish.” He rows his boat every day to Inishcorkish Island where he tends his famous black pigs who happily have the island to themselves to munch its herbs and grass freely. These days, O’Doherty’s pigs are just as famous as the top chefs who feature the “Bacon King’s” products.

For McMeel, new Irish cuisine has deep roots in his country and its history. “My dishes are a modern twist on the dishes served in my homeland’s ancient past – they are every bit as Irish as I am,” he says. “We find the very best locally grown seasonal ingredients, support farms and grocers that respect the earth, and prepare meals that delight and excite the senses. But we don’t get seduced into overcomplicating. Above all else, we let the natural flavor of the good food shine through.”

McMeel is now doing great things as executive chef at the five-star Lough Erne Resort where he works his magic creating his particular brand of modern Irish cooking. At the famous resort, the chef runs three restaurants each featuring a distinctive “Tastes of Lough Erne” including his Catalina Restaurant that earned the coveted Food & Wine Magazine Hotel Restaurant of the Year in 2017.

An articulate spokesman for the cadre of talented Irish chefs who march to the same drummer, McMeel travels the world spreading the word that Ireland is now an exciting destination for foodies. “It’s been a real labor of love,” he said, “ We are doing everything we can to tell the world that Northern Ireland is a world-class food destination.”