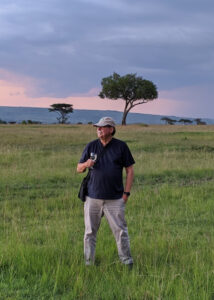 Ron James, publisher, editor, and feature writer for Wine Dine & Travel Magazine, is a native Californian raised in San Diego. He is a nationally recognized pioneer in online broadcast and print journalism.

Throughout his career, Ron earned dozens of national and local journalism awards, including the Online Journalism Association’s first-place award for breaking news in 2004 for The San Diego Union-Tribune’s website, besting The Washington Post and New York Times. For the last decade, he has focused on his journalism efforts, and on his passion for great food, wine, and travel.

After serving in the U.S. Navy for four years during Vietnam, he attended Shasta College in Redding, California where he graduated with honors and served as Student Body President and Vice President. He earned his BA degree in communications at Cal State University at Fullerton.

Along with his four brothers, Rich, Greg, Mike, and Pat, Ron founded the iconic James Gang graphics company and action sportswear retail chain in Ocean Beach where it is still in operation today. In 1989, Ron began creating multimedia CDROMs out of his San Diego beach bungalow. He wrote about the fledgling multimedia industry for local and national publications.

Ron and his soon-to-be wife, Mary, wrote The Multimedia Casebook published by Van Nostrand Reinhold, a textbook used at universities around the world. Ron programmed and designed the first cross-platform CD-ROM hypertext version of a book that included video and audio.

As Director of Broadband for Blue Torch, he pioneered streaming video programming including live week-long sports Webcasts on both coasts. He led a small team to Fiji for a championship surfing event streaming live video on a platform three miles offshore of Fiji using a gas generator and satellite dish.

For nine years he was the managing editor and leader of the pioneering editorial efforts of The San Diego Union-Tribune’s website, SignOnSanDiego.com which has won many local and national honors for excellence and innovation. For two years, while at the Union-Tribune, Ron wrote a weekly nationally syndicated food and wine column for CNS called “Perfect Pairings,” which was published in magazines and newspapers around the world. At this time 2003-2004, he served as President of the San Diego Press Club.

He founded and developed the San Diego News Network, an unprecedented network of local media companies positioned to be a major news contender.

He was the first GM and Editor-in-Chief for the award-winning San Diego Uptown News.

Today Ron is the CEO of Wine Country Interactive, a digital media company, and publisher and editor of Wine Dine & Travel Magazine, print, and digital.

Ron and his wife Mary also researched and wrote the current restaurant guide for San Diego for FODOR’S Travel Guide. He is a member of the Society of American Travel Writers, the Society of Professional Journalists, and The San Diego Press Club. He lives in San Diego with his journalist and co-publisher wife, Mary. When he’s not traveling or writing, Ron creates acrylic mixed-media abstracts and digital paintings which hang in galleries, homes, and offices around the world.