Sazón and Sassella, restaurants owned by their respective executive chefs, and Lawrence and Suzanna Becerra, top our “Best of the Best” list. TripAdvisor reviewers agree, ranking them number one and two of the best Santa Fe restaurants. Sazón also leapfrogged to number four in the nation on TripAdvisors’ highly competitive 2021 Travelers Choice Awards for fine dining.

We had the pleasure of dining with Lawrence and Suzanna at both restaurants. They, along with their award-winning chefs and restaurant teams, have set the standard for excellence on the Santa Fe dining scene.

For us, memorable dining requires more than spectacular food, atmosphere, and service. It requires a wow factor that heightens all senses and leaves an indelible impression. Sazón does that the moment you walk through the door.

Energy pulses through the rooms, dominated by dramatic paintings by Mexican artists Julio de Rita and Federico Leon De La Vega. Many are drawn from the Becerras’ collection gleaned during extensive travel in Mexico. Meticulously selected by Suzanna, they set the stage for Chef Olea’s equally bold dishes. “We want every individual to take away not only a gastronomical experience, but an enriching one too,” she explained, as we settled into a corner table on a busy night.

The stars aligned for chef Olea and the Becerras. A successful London broker, Lawrence brought business savvy and vision to the venture – his first in the hospitality industry. Suzanna added her masterful design sense and eye for detail to shape top dining experiences. And Chef Olea contributed a mastery of Mexican traditional cuisine and a keen sense of hospitality to the blend.

The Becerras were big fans of the chef when he owned and operated his other Santa Fe restaurants, now closed. When a former restaurant space opened on Shelby Street in downtown Santa Fe in 2015, the trio teamed up. The restaurant was an immediate success and thrived until Mother’s Day, 2019 when a fire shut it down for seven months.
After a soft reopening, Sazón didn’t miss a beat — eager fans filled the dining room once more. At least until the pandemic, when all Santa Fe dining spots offered limited food service. Despite the challenges, the Sazón team persevered, and the restaurant’s reputation grew. And now recognized as one of the best in the nation.
“It has been, for sure, an interesting journey,” Lawrence said. Now that’s an understatement.

Each course at Sazón, flawlessly prepared and presented, imbues elements of delight, even when familiar to fans of Mexican food, as we are. Sometimes there’s a surprise, as we discovered when a plate of what looked like street tacos arrived at the table.

Each tortilla held a heap of what looked like crispy shredding carnitas atop a green chili sauce. We both took a bite, aware of the bemused faces of our hosts. Ron had polished off his and Mary was finishing her first bite when Susanna explained: “Baby grasshoppers,” she said with a devilish smile. “I like them except sometimes the legs get stuck in my teeth.” “Our customers love them,” added Lawrence. “They eat them like peanuts at the bar.”

While neither of us finished our serving, these chapuline or baby grasshopper tacos are always on the menu at Sazón, where Chef Olea flavors them with citrus and garlic before crisping in the fryer. A shot of tequila turned out to be the perfect pairing – for nerves and digestion.

Our next dish – featuring daubs of the chef’s signature moles – brought back fond memories. We honeymooned in Oaxaca, the land of seven moles, and have been fans of these complex laboriously made sauces ever since. Sazón guests like them too — so much that the restaurant now offers jars of Sazón branded gourmet moles for sale. One favorite is a red mole of apricots, pecans, Chimayó chile, and white chocolate that the chef invented on the 400th anniversary of Santa Fe’s founding.

The conversation flowed as we gobbled down the next two courses. Flores de Calabaza, delicately fried zucchini blossoms stuffed with three kinds of cheese and huitlacoche (corn fungus), were superb – savory and earthy and delicious. Served in a martini glass, the Camaron-Tini paired the sweetness of a colossal, lightly battered white shrimp from the Gulf of Mexico with garlicky, slightly piquant aioli. Splendid and palate-pleasing.
What a satisfying meal, we thought. Except it wasn’t over. Entrees appeared – perfectly cooked corvina (sea bass) flavored with mole verde and ringed with veggies for Mary and Suzanna while Lawrence and Ron tucked into thick aged beef tenderloin steaks encrusted with spicy black pepper. We all did our best but wound up with doggie bags.

Of course, there was room for a dessert – or two. One bite of the chef’s signature Dulce Sinfonía, avocado-based ice cream with a beet sauce, ginger, and jalapeno. It was easy to see why this is a house favorite. We also polished off his Volcán de Chocolate, a decadent cake blanketed with thick dark chocolate that flowed like lava.

Throughout the evening, Sazón’s service equaled the heights of cuisine and ambiance. Friendly, unobtrusive, and polished, servers were attentive and professional, presenting each course with choreographed flair. And the chef, a standout in his 10-gallon black hat, was constantly present in the dining room, moving table to table chatting to appreciative guests.

Beverage options also are stellar. Sazón offers patrons the largest selection of world-class tequilas and mezcals in New Mexico. A few are very rare and expensive, running hundreds of dollars for a single shot. After our grasshopper tacos, we enjoyed a much-needed shot of smooth and complex Fernando Santibañez’s barrel-aged Xicaru.

Wine lovers will appreciate Sazón’s selective, but extensive international wine list, honored with an “Award of Excellence” from Wine Spectator magazine. Among them are curated vintages, Valle de Guadalupe, inland from Ensenada. Mexico. “ We seek to find indigenous wines that are what people from the area drink with the food,” Lawrence explained.

We quaffed two Baja wines during our feast. One was a wonderfully delicate Chenin Blanc from Bodegas Henri Lurton, Valle de Guadalupe, that paired brightly with the spicy moles. For our entrees, Lawrence ordered Adobe Guadalupe’s Rafael red blend. It was velvety and well-balanced with a long finish. And while Ron couldn’t finish his steak, he did help finish the bottle.

Toward the end of the evening, Lawrence left our table to take a picture for a group of diners nearby who were celebrating a special occasion. He clearly enjoyed the exchange as much as they did. “We’re real sticklers for details,” Lawrence explained. “That care translates to the staff. Everyone picks up on that vibe.” “We are not looking to just serve great food,” he continued. “We are looking to provide our patrons with an exceptional experience. When they are happy, we’re happy.” 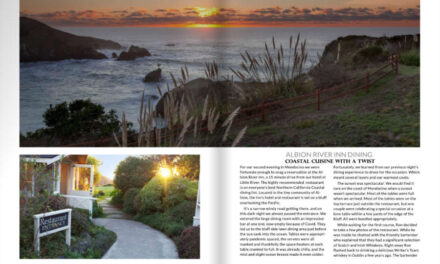